In Defense of Anthropomorphism

Is it really anthropomorphic to to apply human emotions and motivations to behaviors in anthropoid (ie, human-like) primates? What about non-anthropoid (ie, prosimian) primates? Non-primate mammals? Where should we be drawing the line? Which is the worst "sin" in science, using anthropomorphic reasoning to attribute certain emotions/motivations/meanings to animal behavior, or to use anthropocentric reasoning to deny commonalities in our behavior and that of other animals?

This is something I've spent a lot of time thinking about, and I'm definitely a primatologist who prefers to err on the side of anthropomorphism rather than anthropocentrism. But the inspiration of this post came from some discussions I read a while back on ScienceBlogs, where a call for photographs of animals "kissing" (to be used in a book on the evolution of kissing), drew some irate responses insisting that referring to such images as "kissing" was anthropomorphic, inappropriate, unscientific.

Anthropomorphism can be problematic, particularly if it is applied without careful consideration of the species, the behavior, and the underlying neuroendrocine mechanisms in question. However, in most of western science, an inaccurate anthropocentric view, based on some of the mistakes of western philosophy (particularly due to Descartes's mistaken belief that animal were mere automatons that did not truly feel), which in turn were rooted in western religious distinctions between humans and animals, have in some ways hampered animal behavior research. For example, in Japan, where the human/animal dichotomy was not present in cultural perceptions, recognizing individual monkeys as unique actors embedded in a social network resulted in insights into social behavior and relationships that took much longer to recognize in western science.

Darwin challenges this human/animal dichotomy; one of his lesser known books was on the commonality of expressions and emotions in humans and other animals. However, even within Darwinian science, a focus on objective, dispassionate science, combined with biases regarding human uniqueness, have often fostered a very anthropocentric viewpoint. Jane Goodall challenged one aspect of this standpoint, by giving her focal subjects names instead of numbers, and by being willing to vocally defend this. Nonetheless, a few years ago, when I was a field assistant working on research on Cayo Santiago (an island off of Puerto Rico with free-ranging rhesus macaques), where all the monkeys were assigned numbers, the naming vs. numbers debate still seemed to active among researchers (personally, I felt that learning names in conjunction with traits helped me to learn the monkeys faster).

"We scientists are privy to a rare and precious opportunity when we come to know intimately nonhuman animals living in their own worlds. We have a responsibility to these animals to show other people who they really are--sentient beings who matter to one another, living lives as full of drama and emotion and poetry as our own. To perceive the planet as populated with billions of such creatures staggers the imagination, but it is true, and if we want the world of the future to retain this richness, we need to become ever more conscious of this reality before it is too late." --Barbara Smuts

I'm lucky that I've been inspired by great primatologists who do not shy away from anthropomorphism. Barbara Smut's quote reminds me that as someone who has the privilege to get to intimately known animal's lives, I have an obligation to share the beauty of their complex social world, including relationships, emotions, triumphs, and tragedies, with the rest of the human world. And I'm lucky that Jill, my master's advisor, recognizes the commonality between human and primate lives, and takes what could be cosnidered a fairly anthropomorphic view--which in turn, I believe, has helped facilitated her research (you can read more about her and her research, as well as some of the issues with anthropomorphism issue in the National Geographic article Almost Human).

Basically, if you are unwilling to attribute human-like emotion or motivation to primates' (and other animals') behavior, you might miss out on a lot of some of the most interesting aspects of primate behavior. The use of planning in tool use, creative innovation, the strengths of social bonds and attachments, deception, manipulation, grief... all of these things that require recognizing these commonalities. And aside from missing so much, if we avoid being anthropomorphic, sometimes we avoid being parsimonious as well. For animals that are so closely related to us, that share the same neural architecture that govern emotions, and the same neurotransmitters and hormones, it's puzzling to assume a huge emotional gulf. And furthermore, if we assume that fundamental disconnect, than we must also assume that our own neuroendocrine mechanisms and neural architecture evolved independently of our closely relatives--and I have my doubts that many scientists truly do that. Most of the biomedical research carried out on other animals including primates as well as other mammals (especially rats), is based on the assumption that we share these qualities as a result of our shared evolutionary past. Thus, to assume that we cannot share the same emotions/motivations requires simultaneously, unquestioningly, holding two conflicting viewpoints (which humans seem to be proficient at doing).

Clearly, I'm coming down on the side of advocating anthropocentrism rather than anthropocentrism. Nonetheless, this does not mean that I advocate careless anthropocentrism. Rather, I believe we should use reasoned anthropocentrism in interpretating primate behavior (as well as other animal's behavior). Instead, I think we need to carefully consider the behaviors, in terms of its operational definition, the underlying neuroendocrine mechanisms, and its proximate functions. For example, in considering a picture we might see of animals kissing, we might want to consider to following questions: 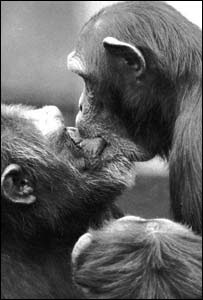 1) Does the behavior fit the operational definitions we would use for a corresponding human behavior?

*ie, two individuals pressing each others lips together, or one individual pressing their lips against another individual's skin.

2) What are the assumed functions/motivations of the behavior?

*ie, in humans, we assume that a kiss is an expression of love and affection, and a sign/mechanism of social bonding.

3) What are the underlying physiological mechanisms?

*ie, in humans, the actions of oxytocin are thought to underly expressions of love and affection, and facilitate social bonding.

*other mammals share the same hormone, and it fulfills the same function--most of our understanding of this hormone is due to research conducted in rodents.

5) If we assume a commonality in intention/motivation, is it consistent with the social structure/organization/behavior of these species? Are there possible alternate explanations?

*If we are looking at a species in which social bonds are important, this would support the assumption that the "kiss" behavior may be fulfilling this function. If ware looking at a species that does not form strong social bonds, then we should consider the possibility that this is NOT a homologous behavior. Furthermore, if there is a possibility that this behavior may be the result of other mechanism (ie, it could potentially be two unfamiliar individuals sniffing each other to gain olfactory information, if it could potentially be one individual preparing to bite the other individual, etc.)

If we look at many of the behaviors we see in primates (as well as many other animals, particularly other mammals) what is termed "anthropomorphism" is often an interpretation based on assumptions of homology.
Posted by Michelle Rodrigues at 1:38 PM