Those Fongoli chimps are at it again...

I LOVE the Fongoli chimps. Now, granted, I am a bit biased, because Jill Pruetz was my master's advisor, so between her and other grad students, I have heard so much about the chimps that I feel almost like I know them. But nonetheless, individually, there's quite a few fascinating characters that are full of charm and personality, and as a group, they always seem to be stretching the limits about what we know about chimpanzees, and what we might be able to infer about our ancestors.

(Note: the picture above is by Frans Lanting and is published in National Geographic's Almost Human. I think they male pictured might be K.L., but I'm not sure).

So first, Jill and Paco Bertolani have just published an article in Paleoanthropology about behavioral responses to a savanna environment. While savanna environments present a number of stressors, the chimps utilize a number of behavioral adaptations to cope. During the dry season, they use caves to shelter themselves from the sun. During the early part of the rainy season, they take advantage of naturally forming pools to soak in. Furthermore, when the moon is full, they take advantage of that light to travel and forage (who would have thought that chimps would be night owls?). Furthermore, unlike the typical fission-fusion social organization, the Fongoli chimps travel in one large party over their huge home range.

I highly suggest checking out Jill's description of nighttime activities as well.


Furthermore, Jill and Tom LaDuke have also recently published a paper on chimpanzee understanding of fire, which is online in the American Journal of Primatology, and will be published in print in 2010. Due to fires set for agricultural purposes, parts of the chimps' home range experiences burning on a seasonal basis. The chimps are able to predict the direction and movement of fires, and rather than expressing fear or stress, calmly adjust their ranging patterns to avoid it.

1) Conceptualization of fire--an understanding of the properties of fire, in order to predict where it will move, which allows for maintaining close proximity to the fire.
2) The ability to control fire--this includes understanding how to contain the fire, provide or deprive fuel, and possibly the ability to extinguish it.
3) The ability to start a fire.

They argue that the Fongoli chimps exhibit mastery of the first stage. Furthermore, it's possibly that they may have cognitive understanding of the second stage. However, Jill notes that she doesn't think that they'll be figuring out how to start fires anytime soon.

You can read more about it here.

Finally, one of Nickel's (pictured above, with her infant Teva) hunting tools will be displayed at the Smithsonian's Hall of Human Origins, which opens in March. You can read more about it here.
Posted by Michelle Rodrigues at 11:10 AM 2 comments:

Tool use in invertebrates!

The veined octopus selects coconut shells, empties them, and then carries them across the sea floor to create a hiding spot. You can see it on video here. And unlike hermit crabs, they select and collect the coconut shells for later use, and when they carry them to the selected spot, they provide no protection. Seems like those octopi are planning ahead. Who would have thought octopi are so forward-thinking?
Posted by Michelle Rodrigues at 3:57 AM 3 comments: 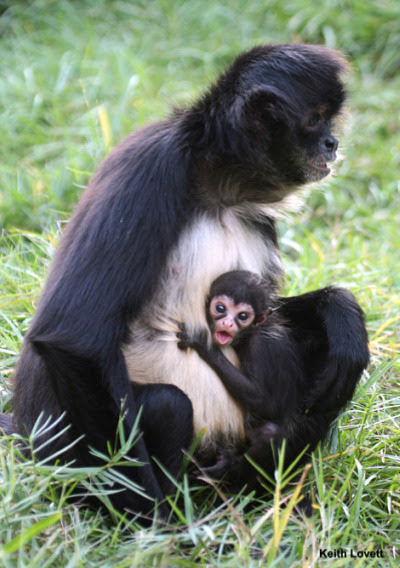 Baby spider monkeys are pretty much the most beautiful thing in the world (at least to me). Just look at that darling face!

Read about this adorable little guy on Zooborns!
Posted by Michelle Rodrigues at 10:01 AM No comments:

Check it out at Prancing Papio

I will have to read that paper when I get time. If monkeys are using syntax, it sounds like one of the hardest-to-achieve feature of language, thought to be unique to humans, is not quite as unique as we thought...
Posted by Michelle Rodrigues at 6:18 AM No comments:

Welcome to this addition of Four Stone Hearth! Sorry for getting it up a couple days late. This weeks edition has several perspectives on human evolution. Over at anthropology.net, Tim Jones follows up Turkey Day with a discussion on the archaeological evidence for bird consumption in the Middle Pleistocene. While bird consumption may have been overlooked due to a focus on larger prey items, catching prey that can fly away indicates sophisticated hunting techniques. Over at Ad Hominen, Ciarán Brewster argues that Chins do Not a Human Make; rather, the presence of a slight chin in archaic Homo, as well as the lack of a defined chin in some 'modern' Homo indicates gene flow between archaic and modern humans. So basically, the simple rule that I gave my students at the beginning of this week, "If it has a chin, it's a modern human," was apparently inaccurate.... Ooops.

Ciarán also pointed out a couple other posts to check out. Over at Gene Expression, Razib Khan discusses his thoughts on The Future of Human Evolution. Khan takes issues with Ian Tattersall's statements in National Geographic that large population size and extensive mobility makes further evolutionary change of our own species unlikely. Khan argues that, in a large population, even though fixation due to genetic drift is unlikely, more mutations arise, and selection can act more effectively. Furthermore, he argues that the mixing of different populations will not reduce variation; rather, it will result in the emergence of new genotypic combinations. At NeuroLogica, Steven Novella discusses the latest Update from Hobbiton. Steven addresses the limitations of the current evidence, the controversy over interpretations, and recent evidence, concluding that the small brain size of H. floresiensis, "suggests that H. floresiensis specifically evolved a small brain, while retaining a rather advanced tool-making ability. This has led some to speculate that H. floresiensis had a more efficient brain design – packing more cerebral power into a smaller space."

Don't drills have beautiful rear ends? Since this week's submissions have focused on paleoanthropology and human evolution, I'm adding in a few interesting primatological posts. Beast Ape discusses primate coloration in Badge of Status in Drills. While male coloration is often though to be a result of sexual selection, particularly as a result of female choice, a recent study has found that while male coloration in drills is a badge of social status, it does not relate to female preference within a given a given rank. Over at Prancing Papio, Raymond Ho discusses recent evidence for Grandmothering in Japanese Macaques. Although the evidence is limited and anecdotal, this is one of the first published accounts in support of the Grandmother Hypothesis from nonhuman primates. I think this is important, because I suspect there's been more observations of grandmothering in primates (I'm pretty sure I've heard of it happening in rhesus macaques, and wouldn't be surprised if there were accounts from other species as well), but anecdotal evidence is likely to go unreported. Hopefully this paper will spur some further investigation of this behavior. Finally, for those who haven't read my second installment on tool use and cognition, I highly suggest you read Can Water be Used as a Tool?

Thanks for reading this edition of Four Stone Hearth! The next edition will be hosted by Anthropology in Practice. If you're reading this, I encourage you to submit for future editions. The submissions with this week were predominantly biological, with a focus on human evolution; furthermore, they were all submitted by male bloggers! I'd love to see some more diversity in future editions!
Posted by Michelle Rodrigues at 12:22 PM 4 comments: