Three of my fabulous field assistants have been accepted to graduate school, and have exciting research plans! 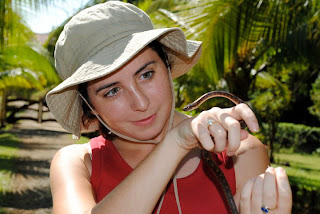 Emily "Little Chair" Stulik will be pursuing a Masters in Biology at Indiana-Purdue University to study herpetology with Dr. Bruce Kingsbury. She plans to focus her research on either Massasauga rattlesnakes in Michigan or river turtles in Indiana. 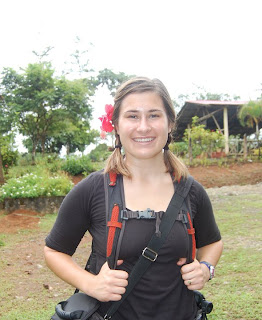 Anna "Fondles Poo" Kordek will be pursuing a Masters in Anthropology at Northern Illinois University with Dr. Leila Porter. Anna plans to study captive bonobo endocrinology, and hopes to eventually study bonobos in the field as well. 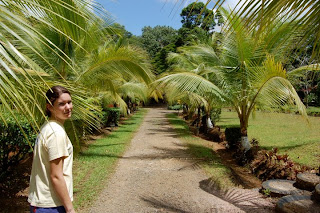 Lindsay "One Feather" Mahovetz will be entering the Psychology program at Georgia State University to study ape cognition with Dr. Bill Hopkins.  She plans to study great apes at the Language Research Center, Yerkes Primate Center, and Zoo Atlanta.

Congratulations, ladies!  "Sings with Monkeys" is very proud and excited about your future research endeavors! Of course, I am slightly disappointed that none of you are planning to study spider monkeys, but...  I'm also envious of Anna, because I too have dreams of studying captive bonobos at some point!   And hopefully someday you will all get to return to El Zota to see how our beautiful monkeys are doing!
Posted by Michelle Rodrigues at 11:56 AM No comments:

I just read about Damien Aspinall's plans to reintroduce many of the Aspinall Zoo's animals, including gorillas, langurs, and gibbons, as well as Mark Bekoff recent blog post praising these efforts.

Quite honestly, I have some serious concerns about these reintroductions, and am appalled that a prominent ethologist is so uncritically supportive of these efforts.  The motivation is one I understand, although I do not agree with either Aspinall or Bekoff's perspective on the efficacy and ethics of zoos (both have a very negative view on zoos efficacy and ethics).

In theory, re-introductions sounds like a wonderful, beautiful idea.  Take animals whose ancestors were wrongly taken from their kin and native environment, and return them so that they can be wild again.  This is an idea that has inspired me from the very first time I watched Born Free, and when I became interested in primatology, the Golden Lion Tamarin project was my inspiration.

And honestly, while I absolutely would love to see re-introduction programs succeed, they have very low success rates, and in many cases will be scary and traumatizing to the animals involved.  Re-introduction of birds and reptiles have higher success rates than mammals, and highly social mammals such as primates have some of the greatest obstacles and lowest chances of success.  The best candidates for re-introduction are usually wild-born sanctuary animals (who may have some memory and experience of the wild).  Individuals who have spent their whole lives in captivity, particularly those that are very human-oriented, are poor candidates for reintroduction.  Most re-introduced animals have short lifespans, are at risk for starvation, predation, and attack by wild members of their own species.  Furthermore, particularly with primates, and especially with great apes, there is a risk of spreading human-contracted diseases to wild populations.

Ultimately, while I do believe that carefully planned reintroductions can be successful, and in particular have value for increasing wild populations numbers if the introduced animals are able to live long enough to reproduce, I do not think it is a solution for individual animal welfare.  While the idea assuages the guilt that humans may have for the past atrocities of capturing wild animals, and of keeping their descendants caged/confined for human purposes, it may not be in the animals' best interests.  Particularly for human-oriented animals who have formed bonds with human caretakers, release into the wild, even in a soft release (a soft release is when animals are given post-release support and monitoring), is traumatizing, and in my opinion, may be downright cruel.

If you are further interested in this topic, I highly suggest reading the following:

Also, if you are interested in my perspective on zoo goals and their efficacy, check out these previous posts:
Do Zoos Accomplish their Goals?
Zoo Goals: Conservation, Education, and Research
The Efficacy of Zoo Education: Empirical Evidence