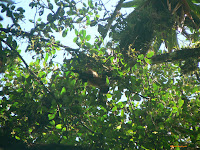 One of the best things about spending a long time in the field is the chance to see juveniles grow up. Mostly, this applies to my spider monkeys; however, I also had the opportunity to watch a family of whistling ducks grow from little hatchlings to adults. When you’re seeing your study animals regularly, sometimes it’s hard to notice they’re growing, until one day it just hits you that someone suddenly looks so much bigger.

Every so often, though, you get the opportunity to see, in a single day, an event that marks that development. Sometimes it’s a rejected weaning attempt, or an infant tentatively taking a few steps after its mother. In this case, juvenile female Lorelai, learned to take a big flying from one tree to the next, instead of relying on her mother to bridge for her.

When young juveniles learn to travel independently of their mothers, they are quite a bit slower and smaller than their mothers, and have trouble negotiating some of the larger tree gaps that spider monkeys regularly cross. To help them, mothers, as well as other adults, will use their body to form a bridge from one tree to the next. As they grow older, they learn to negotiate those gaps themselves; in some cases, juveniles will ignore the convenient bridge that their mother provided, and go around a different route to make the crossing themselves. However, in this particular case, the reverse happened. 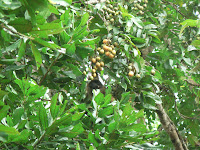 On the grounds of our field station, there were a several wonderful fruiting trees that spider monkeys were sure to use. When those trees were fruiting, we’d get a break from chasing monkeys through forest and swamps, and instead got to watch monkeys right from the station. One of them, a tall scrawny Spondias tree, was a daily favorite for a while last fall, and was nicely located in a position where we could watch it from the gazebo (this was fieldwork at its easiest and most ideal).

One of the most frequent visitors to that tree was adult female Leila (my favorite, and most wonderful, focal subject), and her juvenile daughter Lorelai. Sometimes they would travel there by themselves, other times, with the company of other monkeys (they frequently spent time with another mother-offspring dyad, Jlo and Judah). On this particular day, Leila and Lorelai were by themselves, and after feeding in the Spondias, they continued to travel a route they frequently used. However, at a point that Leila normally would bridge for Lorelai, Leila did not. Instead, when Lorelai traveled to the end of the branch, and then looked expectantly back at Leila, Leila just sat down. And then she waited. Lorelai looked back at her, and then eventually decided to look forward at gap and judge it for herself. She held onto her branch, leaning toward the gap, but then pulled back. Again, she looked to Leila, and Leila stayed sitting. Lorelai then climbed to a different branch, and again proceeding to cautiously lean out, checking the gap. She hesitated for a while, but then she pulled herself into position, and just took one great flying leap, and safely landed on the branches of the next tree (it’s usually fairly easy for spider monkeys to safely land after those leaps, because they essentially have five limbs that can grab onto branches).

And then as soon as she made it, Leila got up, followed her into that tree, and then continued travelling forward. After that, I watched Lorelai go on to confidently cross many large gaps on her own.
Posted by Michelle Rodrigues at 12:43 PM No comments: