I have been neglecting my blog because I'm am in dissertation crunch time! But I just came across one of my old field journals, so I figured I'd share some of my thoughts from the beginning of my pilot work in the summer of 2008.

I'm so happy, possibly giddy, to be in CR again.  Today I am going to head back to my beautiful, magical spider monkeys! 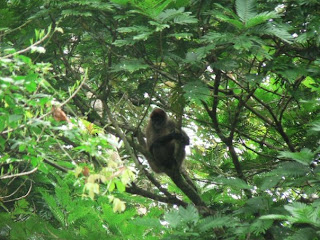 We got into El Zota yesterday. It's good to return here.  Yesterday afternoon, I saw capuchins and howlers.  And this morning, I took the new Laguna trail (later named Sendero Colorado) and saw spiders monkeys.  They started off alarm-barking, more than I ever remember them alarm-barking before!  There was an adult female with a dorsal infant, another adult female, and then an adult female with a juvenile female.  The female with the infant had Evita-like facial markings, and I think the juvie female is Buttercup (one of my focal individuals from my masters research two years before)!  The others left, but Buttercup and her mom stayed, and Buttercup cam down low and watched me.  It was great!  I was so deliriously happy to see them. 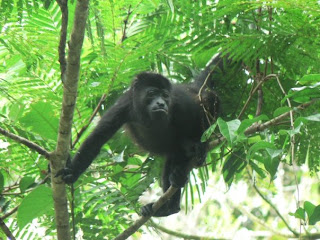 Today I saw a semi-plumbeous hawk (Leucopternis semiplumbea) and a male scarlet-rumped tanager (Ramphocelus passerinii).  I also saw a coati, toucans, capuchins, and plenty of whip-tails (Ameiva festiva).  Yesterday I think I saw a flash of an agouti and had great spider monkey encounters.  I spent an hour with a party containing an adult female (I think Beatrice) and a juvenile female (I think my dear Buttercup!) and a third adult female--she has white markings on her nose that look like sunblock, so I'm going to call her Coppertone (during my dissertation research, she was re-named Leila).  I also ran into a party containing an adult female and a young juvenile-2 male.  Unfortunately, I then fell into the floating vegetation mat swamp, and lost the monkeys. 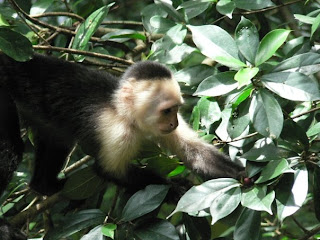 I found one adult female spider in the afternoon, in association with howlers and capuchins.

After that, I got busy with a field course and data collection, and the journal-writing stopped. But it's fun to read those recollections from several years ago!
Posted by Michelle Rodrigues at 6:53 AM No comments:

In a couple weeks, one of my favorite conferences, MPIGs, is coming up!  I'm really excited for this year, because I have both a podium and poster presentation.  Also, I'm finally going to meet a couple of my fellow primatology bloggers, Raymond of Prancing Papio, and Ashlee of This is Serious Monkey Business.

Here are my abstracts for the presentations!

Identifying hormonal correlates of social behavior in primates can help us understand variation in specific social behaviors across individuals.  Here, I report preliminary results of a study of behavior and endocrinology in wild adult and subadult female spider monkeys from El Zota Biological Field Station, Costa Rica, over a 15-month period.  Estradiol concentrations were assayed from fecal samples collected from recognized females using Enzyme-immunoassay (EIA) techniques. Over the entire research period, mean individual rates of whinny vocalizations were significantly correlated with mean estradiol concentrations (Spearman’s rho=0.818, two-tailed p=0.002, N=11).  Furthermore, both whinny rates (Spearman’s rho=-0.755, two-tailed p=0.007, N=11) and estradiol concentrations (Spearman’s rho=-0.764, two-tailed p=0.006, N=11) were significantly negatively correlated with mean grooming rates.  These findings cannot be accounted for by differences in age, reproductive state, or parity.  Previous studies have indicated a sex difference in whinny production rates, with females producing more whinnies than males. The results of this study suggest that endogenous hormonal factors may affect whinny production, and these factors may underlie the pronounced sex differences observed for this vocalization. The negative relationship between whinnies and grooming indicate that whinnies may serve as a form of “vocal grooming” that plays a role in maintaining social bonds in a less time-exhaustive manner.

Posted by Michelle Rodrigues at 6:52 AM No comments: