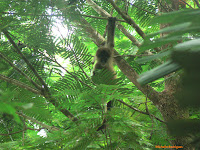 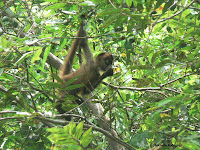 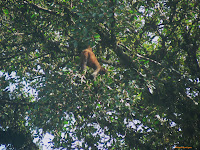 And this is Jlo!
Posted by Michelle Rodrigues at 10:36 AM 1 comment: 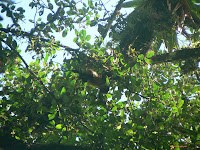 This is Lorelai, the juvie daughter of one of my favorite focal animals, Leila. 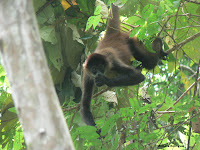 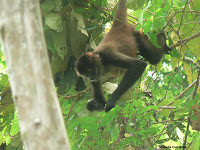 And these are pics of Leila herself!
Posted by Michelle Rodrigues at 10:29 AM No comments:

The rainforest is a malleable place. At moments it seems absolutely magical, such as they rare occasion when you hear strange sounds that turn out to be coming from a tapir, or a day of following your monkeys with great visibility as they groom, play, and embrace. At other times, it is truly miserable, such as when you get so stuck in the swamp you have to crawl out, you get bitten by bullet ants, or you brush up again stinging plants that produces burning welts. But most of the time, you get very used to it, and it’s just very mundane—just like your backyard back home, only instead of squirrels in the trees, there are capuchins.

While that might sound anything but mundane, just as the monkeys get habituated to you, you become increasingly habituated to the forest. The creatures that seemed so exotic and exciting your first week start to become just another boring sight that you aren’t all that interested in. You look forward to the rare encounters of creatures you’re dying to see (tapir, jaguarundi, tamandua, and of course the holy grail of them all, jaguar), but fail to get excited at seeing the everyday creatures.

For example, on almost any day, a hike in the forest almost guarantees an encounter with strawberry and green-and-black poison dart frogs, highways of leaf-cutter ants busy at work, Ameiva festiva lizards, various small anoles, and orependulas. In addition there are almost an innumberable amount of insects and spiders (arachnids, not monkeys) that I have little interest in and don’t bother looking closely at (I’m more concerned with trying to keep spider webs, their residents, and their prey off my face—this doesn’t always work).

Yesterday, I had a frustrating day in which I could not find my monkeys. I spent hours hiking through the forest with absolutely no success. In addition to the above creatures, I saw a tarantula as big as my hand, keel-billed toucans, blue morpho butterflies, cat footprints just a bit smaller than the size of my hand (probably jaguarundi or ocelot—jaguarandi have been seen by a few lucky people, I haven’t heard of any sightings of ocelot), tapir tracks, and howler monkeys. Oh and I also saw capuchin monkeys in the backyard, clowning around right outside the kitchen, just after lunch. However, the sad thing was—this was my idea of a really disappointing day. Perhaps the sighting of something slightly more unusual could have made up for the lack of spider monkeys (I still get excited about seeing peccary, river otters, armadillos, coatis, and tayra, as well as unusual birds I don’t see very often) . . . But no spider monkeys means no data, which really stresses me out (especially in a week like this week, in which I have been feeling sick and thus not going out as often, and when I have been heading out, I’ve had really bad luck at finding/following my monkeys). But it nonetheless occurred to me yesterday that I’ve gotten really, really spoiled, and my habituation to the wonders of the forest means that I no longer enjoy or appreciate it as much as I should.
Posted by Michelle Rodrigues at 10:28 AM No comments:

I originally started this blog because I had serious field-blog-envy. I’d read other people’s postings about their fieldwork, and it make my miss the field. I was excited about getting to my own fieldwork, and sharing my stories to make all of my readers basilisk-green with envy.

Let me warn you then, that sometimes it’s much more fun to dream of fieldwork and read other people’s fieldwork tales than it is to be in the field.

I know this. I’ve said before that fieldwork is 90% drudgery and misery, and 10% of being so absolutely magical and amazing that it make you want to keep slogging through that miserable 90%. But when you are at home, comfortably ensconced in all the comforts of home, reading stories about fieldwork while you are snuggled on the couch with your cat, somehow fieldwork sounds so much more exciting. And memory dims all your moments of being miserable in the field, and instead you remember that one really amazing day when you saw howler monkeys, a coati, and iguana, in the same tree, or the day you saw a juvie female spider using a stick as a tool to scratch herself, or the days when you managed to stick with one party of spider monkeys and follow them for four hours straight.

Yet, somehow, when I was in the US on a two-year break from fieldwork (which was never my intention, but waiting for grant money and life happening in the meantime caused me to push back my fieldwork until about a year later than I originally planned), that’s all I seemed to remember. And this summer, I’ve gotten a HUGE dose of the many downsides of fieldwork.

For starters, there’s illness. Now, I tend to have a pretty dismal immune systems, so I spend plenty of time being sick wherever I am. But this summer, I began my fieldwork with an unknown ailment (according to the doctor, “a bug,”) that slowed me down and majorly cut down on the amount of time I felt able to actually spend in the forest with the monkeys. And the past few weeks (including my time spent in the US), I’ve had bad stomach problems, so between my trip to the US and a week of feeling miserably sick, I missed out on about two weeks of data collection. Being sick is miserable, no matter where you are. But in the field, it’s twice (if not thrice) as worse, because in addition to feeling horrible, you’re away from all the comforts of home, plus you’re stressing out on all the data you might be missing out on. And the combination of feeling icky, stressing about your research, and being bored and frustrated at the station just make you feel worse. And in case that’s not bad enough, there’s always the fun of clinics in a country where you can’t fluently speak the language . . . (although I realize it could be much worse—I’m grateful to be in Costa Rica, where the medical care is good and I at least speak a bit of the language).

And then there’s all the biting and stinging things in the forest. I am the mosquitoes equivalent of crème brulee, tiramisu, and cheesecake, all rolled into one—they absolutely swarm me, and I think I regularly become anemic from losing too much blood to them. While they are the biggest irritation, then there’s the occasional biting ants, and then bullet ants and stinging plants. Today I brushed by one of the stinging plants, which leaves burning welts on any skin it comes in contact with. And yesterday I got two bullet ant bites, which brings my lifetime number of bites up to 6.

Of course, there’s always the swamp. My field site has tons of swamp, and every time I’m stuck in it, I think of The Neverending Story, when Atreyu’s horse dies in the swamp because he thought sad thoughts. Whenever I start sinking in the swamp, my first thought is of poor Atreyu’s horse (which of course, is a sad thought, which would only hasten my drowning if El Zota’s swamps worked the same way as they did in the movie—luckily they don’t. Sad thoughts or happy thoughts, I can usually drag myself out by crawling, if all other attempts to haul myself out have failed). At least right now, the swamps are actually at a minimum, because it’s been incredibly dry here lately (dry here as in not a lot of rain—it’s still super-humid).
But really, the two major frustrations I have right now are 1) not getting as much data as I would like (because those damn spider monkeys are not cooperating!), and 2) being away from my boyfriend. I can put up with the swamp, the insects, all the evils the forest has to throw at me, if I can spend some quality time with the spiders. And I do, sometimes, but more often, it seems like either the monkeys are being elusive, or I find them, and they find ways to evade me shortly into following them. And when I’m not spending enough quality time with them, it’s hard to stay motivated and enjoy being here. And the less I enjoy being here, the more I feel guilty for having to be away for so long, and the more I regret the life choices that have lead me here (why, oh why, did I decide to go to grad school years ago? Why did I decide that I had to do my research on the social behavior and endocrinology of wild spider monkeys? Couldn’t I have picked an easier dissertation project?). Of course, I knew exactly what I was getting myself into . . . so I only have myself to blame.
Posted by Michelle Rodrigues at 10:26 AM No comments: