Capuchins in the Backyard

All of these pictures are from the backyard, right behind my window. 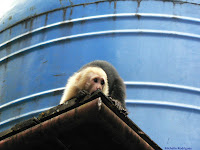 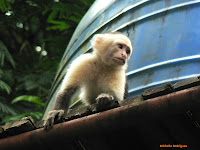 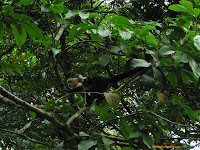 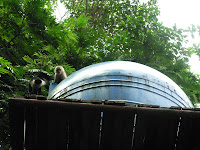 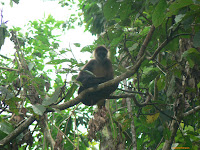 Posted by Michelle Rodrigues at 3:53 PM No comments:

Hi all, sorry I have been so horrible at updating the blog! I never seem to have enough time at internet cafes, and I've been rather busy during my holiday break back in the US! But here's a post I wrote some time ago...


Today, I only spent twenty minutes watching the monkeys, but it was definitely a good twenty minutes. The first focal was like most others—monkeys happily pigging out on Spondias. However, the next focal was one of the cutest 10 minutes I’ve ever watched in the field. Leila and Jlo curled up in the crook of a tree, each of them reclining in an opposite direction on the branches. Meanwhile, hanging down in between/on top of them were Judah and Lorelai, dangling from their tails and wrestling. Jlo groomed Lorelai, then attempted to Judah, who was too busy playing to be bothered with a quick grooming session. Judah and Lorelai scampered off to continue playing a few meters away, and Jlo resumed grooming Leila. And then, Jlo shifted positions, so that she was lying with her head on Leila’s belly, and Leila groomed her. And then, at the end of the focal, they were off traveling again, so quickly after their short social break.

This all occurred just in the backyard, and I so wish I’d had my camera to take a picture of them. I’m not sure I could have gotten a good picture (I pretty much could only see them standing in one spot, crouching slightly, and needed my binoculars to see grooming movements), but it was so adorable, seeing the two females curled up so cozily, with the kids dangling between them. And the sight of Jlo curled up with her head on Leila’s belly was just priceless. It seems to me as though the spiders don’t have much time to engage in socializing (it always seems to be a quick social interaction here or there in between resting or feeding or traveling), but when they do, it’s clear that they do have some strong bonds. I’m really hoping that by the end of the year, I have enough of these tiny moments recorded. It seems so obvious to me that some of the females here have very tight friendships, but its really tough to get enough data that can really support that. However, I think that, as long as I can amass enough data, there will be a pattern of some tight friendships between particular individuals, a few individuals who are social butterflies, and then some who are socially isolated. I’m hoping that the tightly bonded and social butterflies will have a pattern of lower cortisol concentrations (thus supporting my hypotheses). I also suspect, at least at the moment, that the individuals that are the most isolated are the subadults and adult females without offspring—I’m wondering if that pattern will hold when I look at the data.

Sometimes, from watching the monkeys, you get a subjective impression regarding what’s going on, and it’ll be really interesting to see if the data eventually supports that. Of course, I still have nearly a year of data collection to go, so it’ll definitely be a while.

Today I also had a bit of a conundrum trying to collect a fecal sample. I saw the sample fall, and then went down the area to look for it. At first, I could find it (which is sooo frustrating), but then, I saw a piece of the sample—wedged on the head of a daddy long-legs-ish spider. The problem then, became, how to successfully collect the sample and free the spider? I tried taking the edge of a folded leaf, and using another leaf, tried to pry it lose from the spider. Eventually, between my efforts and the spider’s wriggling, I managed to get it free and process it. Let’s hope that the spider doesn’t have any pheromones or anything like that on the top of its head that could affect the hormone analysis . . .
Posted by Michelle Rodrigues at 3:49 PM 2 comments: